Genocide? Bolsonaro and indigenous peoples in the COVID-19 pandemic

In the last few weeks there has been widespread repercussion in the Brazilian press regarding the controversy between the Minister of the Supreme Federal Court, Gilmar Mendes, and some members of Bolsonaro’s Government.

On July 11, in reference to the government’s strategy to refrain from promoting national coordination to combat the COVID-19 pandemic, as well as the fact that two months ago the country had an interim minister in the Ministry of Health – with no ties to healthcare – Gilmar Mendes stated that “The Army is associating itself with this genocide”.

But, unlike the death toll of 80,000 in Brazil due to the new coronavirus, it was the word genocide, used by the Minister that ended up causing public discomfort to members of the Government, who threatened to call the Attorney General’s Office against the Minister’s speech.

Despite the institutional crisis produced, the use of the word genocide is not inappropriate. President Jair Bolsonaro systematically attacks the rights of indigenous peoples enshrined in the 1988 Constitution. His repertoire includes everything from racist statements to the dismantling of FUNAI, which threatens the integrity of the indigenous population in Brazil.

As a result of the pandemic, the situation of constant precariousness of indigenous rights has accelerated and has gained even more international notoriety: the scientific journal The Lancet in a recent editorial declared that Amerindian peoples face their greatest threat since the end of the Military Dictatorship.

Given the general context of violations of indigenous peoples’ rights perpetrated by Bolsonaro’s Government, throughout this article we will briefly present the rights of indigenous peoples in the light of the Citizen Constitution after which we will address the recent attacks directed at them by the current members Federal Government. Finally, we will discuss the possibility of criminally typifying the conduct of Brazilian authorities as genocide.

Indigenous peoples and the 1988 Constitution

The process of redemocratization and the drafting of the 1988 Constitution of the Republic were marked by demands from indigenous entities that resulted in Chapter VIII of the new Charter. The section, entitled “Dos Índios”, deals with social organization, culture and the right to indigenous peoples’ lands.

Organizations such as the São Paulo Pro-Indian Commission (CPI-SP), in conjunction with the Union of Indigenous Nations, the Ecumenical Documentation and Information Center, the Missionary Indigenist Council and 30 other indigenous entities founded the “National Coordination for Indigenous Peoples and the Constituent”, a fact that contributed to the drafting of the rights contained in articles 231 and 232 of the 1988 Constitution.

Thus, the rights of indigenous peoples were enshrined in the Constitution: the framework of the right to difference, the recognition of their social organization, their customs, their languages, their beliefs and traditions. Still, their original and imprescriptible rights are considered the right to the lands they traditionally occupy.

In addition to recognizing the procedural capacity of the indigenous peoples to defend their own rights and interests, the Public Prosecutor’s Office has a duty to intervene in all legal proceedings relating to these rights.

In addition, with Decree No. 5,051 / 2004, Brazil incorporated the text of Convention 169, of the International Labor Organization, which provides the right of indigenous peoples to prior consultation and participation in matters relating to their lands, their social, cultural and economic organization. This means that the Brazilian State has an obligation to inform them of government plans that may affect their lands, in addition to being able to participate in the drafting of laws and projects that protect and promote their rights.

After centuries of excluding indigenous voices from the country’s constituent processes, the drafting of the 1988 Constitution of the Republic had significant deliberations among indigenous leaders, such as Cacique Raoni and Ailton Krenak, which enabled a democratic drafting of rights and guarantees of the indigenous peoples in the Brazilian territory.

In the 2018 election campaign, current President Jair Bolsonaro claimed to be against the recognition of new indigenous lands in the country, which would no longer have “a square centimetre demarcated”. About a year and a half into President Jair Bolsonaro’s administration, the escalating tension between the Federal Government and indigenous communities has grown day by day.

Setbacks regarding the social environment agenda were clear in the early days of Bolsonaro’s administration. By means of a provisional measure (MP), the president transferred the responsibility for the demarcation of the indigenous territories from the Fundação Nacional do Índio (FUNAI) to the Ministry of Agriculture, headed by the former leader of the agribusiness division in Congress, Tereza Cristina. MP 886/2019 was rejected by National Congress and the Federal Supreme Court (STF), which established that demarcations must be made at the Ministry of Justice, under the authority of FUNAI.

Another action that drew attention to indigenous rights violations under Bolsonaro’s government was the appointment of Marcelo Augusto Xavier da Silva as the president of FUNAI. The current president of the agency was chosen with the approval of the ruralists and appointed a former evangelical missionary to head the General Coordination of Isolated Indians and Recent Contact, a fact that worried civil servants and indigenous leaders.

After national and international criticism for its actions regarding the environment, the government created the Council of the Amazon and the National Environmental Force for the protection of indigenous lands. However, the president’s remarks directed at the indigenous peoples remained intolerant towards their customs, way of life and beliefs and even disrespecting their leadership.

Bolsonaro and indigenous issues during the COVID-19 pandemic

However, actions to stop provisions of legislation only highlighted the contempt faced by indigenous peoples under Bolsonaro’s Government – an already vulnerable group in the face of the pandemic.

For example, the original text saw to it that some services be urgently and periodically provided to the community, free of charge. Among these, President Jair Bolsonaro vetoed universal access to drinking water, the free distribution of hygiene materials, the emergency supply of hospital beds and intensive care units and the purchase of ventilators and blood oxygenation machines, essential measures for preserving the health of members of indigenous communities.

According to a study by UNICAMP, more than 81,000 indigenous peoples are at risk of dying from COVID-19 if the pandemic reaches the region where they live. Further still, languages ​​and traditional festivals can be lost if the pandemic is not stopped in its tracks in the midst of the indigenous populations.

The president also vetoed the provision of Law 14.021 / 2020, which provided for an “emergency budget allocation” with the opening of extraordinary credits and the transfer of funds to states, the Federal District and municipalities capable of guaranteeing the survival of the indigenous peoples during the pandemic.

Questioned by the increase in illegal mining in the Amazon during the pandemic, the Vice President of Brazil, General Hamilton Mourão, declared that it was “a herculean task to block the entry of people into indigenous territories”, which indicated an intentional omission by federal government authorities in relation to the current situation of extreme vulnerability faced by the Amazonian indigenous tribes.

In light of the above, it is clear that the federal government has systematically violated the rights of indigenous peoples, rights that are enshrined both in the Constitution and in international treaties signed by Brazil, such as ILO Convention 169 and the United Nations Declaration on the Rights of Indigenous and Tribal Peoples, thus endangering the survival and reproduction of these diverse cultures, languages ​​and ethnicities in Brazil.

In 2019, President Jair Bolsonaro was indicted before the International Criminal Court (ICC) for his policies on indigenous peoples. The request was filed by the Human Rights Advocacy Collective and the Dom Paulo Evaristo Arns Human Rights Defence Commission, as a warning against Bolsonaro’s policy aimed at indigenous Brazilians. In the request, the entities called for the ICC to investigate the actions of the current government that could threaten the survival of indigenous populations.

This fact demonstrates that, since last year, Bolsonaro has been under pressure from entities that defend the rights of indigenous peoples because he is spearheading genocide against these peoples. However, these accusations have become even more substantiated during the pandemic with a statement given by Minister Gilmar Mendes, who, after all, has sufficient technical knowledge to do so.

But, finally, what is the crime of genocide?

According to Article 6 of the Rome Statute, of which Brazil is a signatory, genocide translates as the deliberate extermination of a population, a group or part of an ethnic, racial or religious group, a culture or a civilization. One can highlight the author’s intentionality as a requirement for the typification of one’s acts.

Thus, a possible accusation by federal government for the crime of genocide would require evidence that President Jair Bolsonaro and the Brazilian Army intend to exterminate indigenous populations, which, for some jurists, is a difficult task.

However, according to the lawyer Deisy Ventura, the actions perpetrated by Bolsonaro’s government clearly demonstrate the guile in the extermination of indigenous communities during the new coronavirus pandemic. In an interview with the newspaper El País, the professor cites Bolsonaro’s veto on crucial points for guaranteeing the survival of indigenous peoples provided for in the COVID-19 Emergency Plan. Other lawyers such as Conrado Hübner, a law professor at USP and a researcher at Laut Brasil, have defended the same idea. 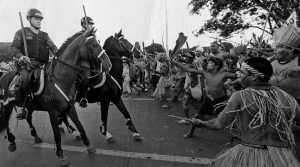 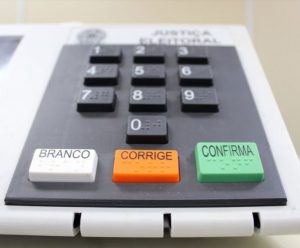 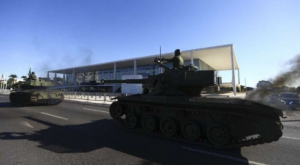