Today, in Brazil, there are daily attacks on democracy, especially on the federal scene. Although they often come from the Executive, it is necessary to recognize the contributions of the Judiciary and the Legislative to the current context. Recently, for example, Congressman Ricardo Barros (PP-PR), leader of the government in the Chamber of Deputies, defended the drafting of a new Constitution for the country, since the 1988 Constitution would have “only rights,” making the country “ungovernable”.

We still have a lot of struggle to realize the rights brought by the 1988 Charter. The political advances achieved by Brazil in recent decades were the result of a Constitution that included Brazilian society in its elaboration. This was due to the active participation of workers (especially represented by the effervescent union movement), feminist movements, black movements, the OAB, and Catholic Church Pastorals. In numbers 72,000 letters were sent, of the 122 popular amendments presented, 83 were considered valid, and to be valid, they needed 30,000 signatures.

The history of the constituent process is broader than the procedures of the National Constituent Assembly (ANC) of 1987-1988. This process was expanded and incorporated by Brazilian society, bringing examples of inclusion and regional development. The noblest example of this is the Participatory Budget. Through it, it was possible to organize and bring into the budget dispute parts of the population previously totally invisible and excluded from this debate.

Meanwhile, municipal elections are approaching, the first round of which will take place on November 15. As expected, attempts to withdraw rights and prevent active citizenship and social participation are also being reproduced in the municipalities. It is in this sense that legal instruments, such as Participatory Budgeting, previously used to deepen the population’s participation in political life, have been disrespected.

Therefore, we ask ourselves: how has this instrument of political participation been treated in the city? What paths have been mapped out for its use in the future? Is it possible to foster democracy with better social participation policies?

The current situation of Participatory Budgeting in Belo Horizonte

On September 10, 2020, the City Council approved in the first round the Proposal of Amendment to the Organic Law (PELO) 1/2017, which includes the Participatory Budget (PB) in the Organic Law of the Municipality. The approval represents an achievement for popular participation in the city, since – confirmed the approval in second round – gives the PB strength of law, allowing the population to cover the application of the instrument, regardless of who is in charge of the city council. However, the situation of participatory budgeting in Belo Horizonte is far from satisfactory.

The approved bill has been in the House since early 2017 – that is, throughout the entire Kalil administration – and was only guided by the mayor on the eve of the municipal elections. Before that, 4 amendments were presented to the Budget Guidelines Bill (LDO) of 2021 that addressed the PB, guiding, among other points, the conclusion of the stalled works, application of 5% of the budget for the instrument and the resumption of participatory processes – all of them were rejected.

These are signs of the disinterest with popular participation that has been established in the city hall since Marcio Lacerda’s administration, and that has lasted for the Kalil administration. As shown in Graph 1, from mid-2009, the PB began to accumulate a large number of unfinished works, while new works continued to be approved. That is, the rounds of participatory budgeting continued to be carried out, commitments were made with the population to carry out the elected works, but even after years of waiting, very little was accomplished.

Graph 1: Developments approved and concluded in the PB until 2018. Source: produced by the authors based on data provided by the Municipal Government Secretariat/PBH in April 2018.

As a result, a huge liability of works of the PB was formed, which in 2016 was of 450 inconclusive works [1]. With the beginning of the Kalil management, the city hall announced that for the works to be completed, no new rounds of PB would be made. In four years of mandate, the city concluded 104 of these works, leaving 346 still in the passive.

Even with the commitment of the current city hall to complete the works stopped, a fundamental issue was maintained from the previous management: the decrease of resources allocated to participatory budgeting in the municipal budget. As shown in Graph 2, the portion of the municipal budget approved for PB, which had been growing since 2002, starts to fall from 2009, while the amount committed – i.e., what was actually applied for the execution of the works chosen – falls even more. In some years (2014, 2016 and 2018) there is still a high in the approved values, but the committed remains in very low numbers. Therefore, there is a significant reduction in the PB in the city budget, both in Lacerda’s management (2009 to 2016) and in Alexandre Kalil’s mandate (2017 onwards). 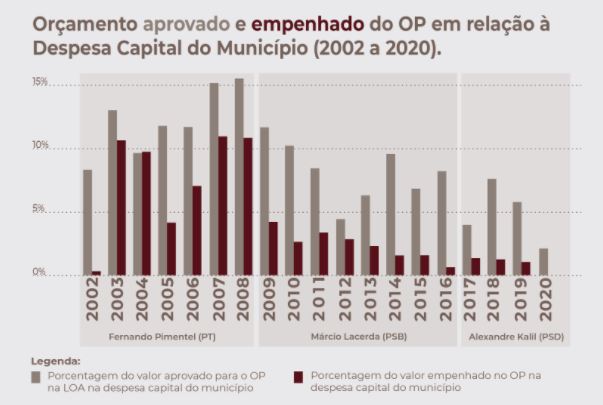 Graph 2: Approved and committed budget of the PB in relation to the Municipal Capital Expenditure.  Source: https://outraspalavras.net/estadoemdisputa/eleicoes-e-hora-de-resgatar-o-orcamento-participativo/

All this indicates a lack of commitment by the city government to the citizen participation gained from participatory budgeting. Even with all the popular mobilization and the serious work of the technicians dedicated to participatory budgeting since its creation, the lack of political will is capable of making the full operation of this instrument of democratization of the city completely impossible.

But this has not always been the case. In its early years, participatory budgeting in Belo Horizonte represented one of the first and most successful experiences of popular participation in urban administration around the world. What became known as “priority reversal” was carried out: every year a portion of the budget was guaranteed for the most needy areas of the city that, until then, had been excluded from planning. Participatory budgeting began to represent the means by which peripheries, towns and slums won essential works and interventions, such as containment of slopes, housing units, cultural centers, health posts, and even urbanization plans.

In addition, participatory budgeting became a way to encourage civil society organization and participation. Residents’ associations, social movements and citizens interested in addressing the problems of their neighborhoods mobilized en masse, until the last rounds of participatory budgeting, to request resources for the most needy regions of the city. With this, not only were the demands of the population heard, but also a space was established for the people to take care of the political processes of their region and the city as a whole. A true school of citizenship and politics.

However, what we see today are works paralyzed all over the city and the demoralization of the PB processes. A clear example is in the Providência neighborhood, a regional north of Belo Horizonte. The population of the region, historically organized around movements of the Catholic Church, mobilized in the PB 2013/2014 (begun in 2012) to conquer the reform of the square of the Church of St. Anthony. The square is one of the few places of leisure in the region and a traditional point for cultural events and so, its reform was approved in the PB with the value of R$ 1.946 million.

After eight years, not only was the work not started, but it entered the list of the “optimized scope” of the city hall. In other words, because of the low allocation of resources for participatory budgeting, a new project was presented with a reduced budget (and an amount not yet disclosed) to carry out a reform that is less comprehensive and different from that approved by the population eight years ago. Thus, the square continues to be abandoned while the population of the neighborhood witnesses the increase in crime and the decline of cultural activities in the region.

It is important to recognize that there is an advance over the previous management. The paralysis of the rounds to conclude the passive works, as well as the approval of the PELO represent a slow march toward the resumption of the success of participatory budgeting. However, fundamental questions remain unanswered.

The PELO does not address, for example, the quantity or source of PHO resources, which have been increasingly scarce, nor does it guarantee transparency in its management. On the contrary, proposals to amend the LDO that addressed these issues and therefore presented a much clearer path for resuming participatory budgeting were quickly discarded by the ruling bloc in the House. In this way, what is seen is a participatory budget far from the control of the population.

Citizen participation is at the heart of democracy

The 1988 Federal Constitution was fundamental in inspiring the development of participation mechanisms. This was not only because of the representativeness and diversity transposed in its text, but also because it developed instruments and structures that could accompany the implementation of these policies in other federative entities. The creation and implementation of Participatory Budgeting certainly resulted from this process.

In Belo Horizonte, the approval of the PELO represents a new possibility of mobilization. Planning professionals, associations and citizens now have the guarantee of the law to pressure the city government – in the current legislature and in the one that will be elected at the end of this year – for the implementation of what is lacking for the continuity of participatory budgeting. Thus, it is hoped to gradually build the way for the resumption of this instrument so important for the city of Belo Horizonte and, with this, to contribute to the resumption of the population’s confidence in politics.

[1] Data provided by the Municipal Government Secretariat/PBH in April 2018 via the Access to Information Law. [2] Undergraduate student in Architecture and Urbanism at EA UFMG, Researcher of the Indisciplinary Research Group and scholarship holder of the Cartography of Perception of Participatory Budgeting in Belo Horizonte [3] Master and Bachelor of Laws by UFMG. Researcher associated to CJT – UFMG. [4] Master and Bachelor of Laws from UFMG. Volunteer researcher at CJT – UFMG. 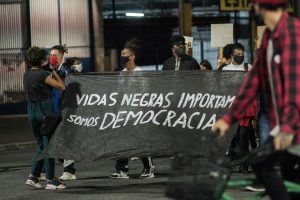 The Constitution challenged: beyond the acts of March 15