In a preface to the Brazilian edition of “Crises of Democracy”, Adam Przeworski (2020) informs that when he began writing his book, Brazil would not be a country in crisis, since its institutions were solid. However, the author explains that the situation began to change after the year 2014, when the candidate for the presidency of the Republic Aécio Neves did not accept the victory of his opponent.

Other signs of an impending crisis would have been, according to the author, the impeachment of President Dilma Rousseff and the impediment of Lula’s candidacy for the elections through what he called “legally engineered removal” (PRZEWORSKI, p.11, 2020). At the end of this preface, Przeworski – despite presenting between the lines that the election of Bolsonaro represented the culminating moment in the configuration of a democratic crisis – informs that it would be up to Brazilian readers to understand or not Brazil as a country inserted in the context of a democratic crisis. In this way, would our democracy be in crisis?

The answer to this question seems obvious to many and is printed in the previous texts of this blog – to which we invite everyone to read. We are immersed in a democratic crisis that is configured as a general crisis of the institutions: the neoliberal directives of the Stock Exchange Government point to a dismantling of rights, the Legislative Branch only seems to reproduce the dictates of a government that controls it and the Judiciary faces a serious crisis of legitimacy. In this scenario, what awaits us in the future? This is the question we will try to answer in this text.

The historian Fabiane Costa Oliveira in her article “The political uses of the past: Remembrance acts around March 31st, 1964” dialogues with the reflections of Alfredo Bosi. The historian weaves that for Bosi the dates are like icebergs tips, “icebergs tips matter to the navigator much less for what they reveal and much more for what they hide. So are the dates for historians” (OLIVEIRA, 2013). It is through this relationship that we enter into reflection on the uses of the past.

There are certain past that are present today and are not present by chance, since they are a fundamental and instrumental part of a power dispute. In moments of political crisis in Brazil this dispute intensifies and with this intensification we are constantly faced with political uses of Brazil’s authoritarian past.

In this sense, it is important to ask some questions: Why in Brazil we are constantly witnessing the past uses of the dictatorship? What are the main reasons that make these uses real and able to be reproduced and incorporated? What is the relationship between these political uses of the dictatorship’s authoritarian past and democratic instability?

The period of redemocratization in Brazil was marked by impunity for torturers, which was intensified both by the interpretation of the Amnesty Law given by the Federal Supreme Court in the analysis of ADPF 153, and by the impossibility of access to the dictatorship’s archives. Thus, the marks of impunity and the non-opening of the archives built the elements for the existence of a “failure to settle accounts with the past”.

With the end of the Military Dictatorship its supporters and the civil society groups that collaborated to maintain the regime did not disappear, as they continued in the institutional and present spaces in society. In moments of political crisis and dispute, these groups find in this open wound elements that justify and make possible the defense of the dictatorship’s authoritarian past. 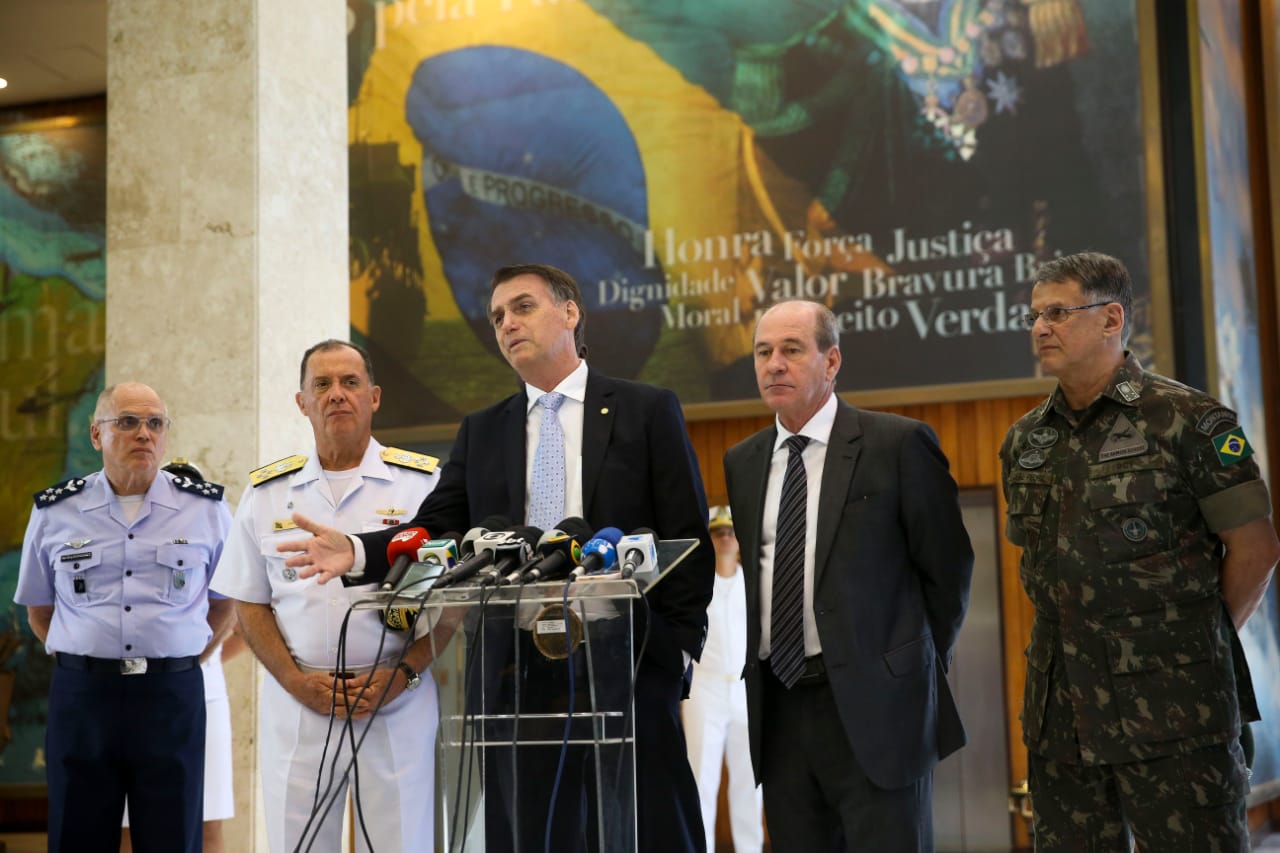 President-elect Jair Bolsonaro, speaks to the press after a meeting with the future commanders of the Armed Forces at the Navy Command in Brasilia. Photo: Marcelo Camargo/Agência Brasil

The great expression of this fact is that President Jair Bolsonaro defended the dictatorship throughout his career as a parliamentarian and today as head of state, which carries high doses of attacks on institutions, individual freedoms, and democracy. Bolsonaro declared his vote in favor of Dilma Rousseff’s Impeachment, exalting the figure of torturer Carlos Alberto Brilhante Ustra, leaving parliament without being responsible for this act.

Therefore, if we have the use of an authoritarian and undemocratic past, one of the ramifications of this use in the relationship of institutional spaces with civil society is the inflammation of acts against democratic institutions. Thus, the political uses of this past contribute to the existence of democratic instability to the extent that they feed these attacks: civil society, by reproducing these attacks, feels legitimized by an institutional discourse, which in turn feeds back on these same discourses produced by some sectors of society.

In view of this, it remains evident that the elaboration of this past is necessary for the construction of a democratic country, which requires, above all, the accountability of the perpetrators of state violence, as well as the adoption of effective memory and truth policies. This dimension of elaboration is indispensable for looking to the future to be committed to democracy, and not to the authoritarianism that is now unfolding on our horizon.

Democracy in dispute, what awaits us in 2022?

When this text argues that an authoritarian scenario is uncovered on the Brazilian horizon it is not intended to be a mere exercise in futurology, since the present has provided us with solid and incontestable evidence of the advancement of the authoritarianism of the Bolsonaro government.

A first point to be highlighted concerns the president’s speech to supporters when American extremists invaded the Capitol. Bolsonaro reported that if Brazil did not adopt the printed voting system in 2022, there would be a bigger problem than that experienced by the United States.

This threat, which occurred on January 7, 2021, adds to another one held on December 22, 2020, in which the president told supporters that if there was no printed vote, the election could be forgotten.

These threats constitute a clear crime of responsibility, since they violate political rights as provided in article 4, III, of Law 1.079/50, as well as putting the Democratic Rule of Law under threat.

The Brazilian electoral system is a world reference in security, reliability and technology. Electronic voting represents an important advance in democratic terms for a country that at the beginning of the 20th Century was marked by a policy defined by the halter vote in electoral corrals dominated by the colonel.

The possibilities of electoral fraud through the print vote are undeniable, and the scholarship desire for their implementation only points to an authoritarian horizon – which, curiously, here also refers to an authoritarian and anti-democratic past linked to Colonelism.

A second point that indicates the authoritarian advance of the Scholarship Government is its posture before the sanitary crisis currently experienced in Brazil. For the configuration of this issue, it is necessary to observe that its government is formed essentially by ministers who are components of the Armed Forces, which proportionally exceeds even the number of ministers belonging to the FA during the governments of the Dictatorship.

This information might not be significant if the Brazilian history and that of the current federal government were not tied to the Military Dictatorship. Moreover, the inexperience of the Ministers in relation to the area to which they were assigned is notorious, which was evident after the appointment of General Eduardo Pazuello to the interim command of the Ministry of Health.

Unlike the other Ministers who occupied the portfolio, Pazuello, as a good member of the Armed Forces, obeys his hierarchical superior in the federal government in order to give way to the scientific denials, fake news and ideologically oriented positions of the scholarship.

These orientations were one of the factors responsible for the intense sanitary crisis currently being experienced in Brazil and which has today as its culmination the absence of oxygen in the hospitals of Manaus. The omission and inoperativeness of the Ministry of Health are responsible for the sanitary crisis, since instead of following the sanitary protocols defended worldwide by doctors and scholars committed to public health, the government prefers to orient the population to adopt preventive measures, such as the use of the famous hydroxychloroquine, which besides being ineffective according to researchers, can cause health problems.

Cloudy horizons of past and future authoritarianism

The path taken by this text presents how the crisis and the democratic instability that we live in Brazil today have a strong relationship with the authoritarian past experienced by the country during the dictatorship, so that the horizon that is projected in 2022, for example, is a horizon with great remnants of a failure to settle accounts with the past. However, besides pointing to a past authoritarianism, what is uncovered before us is an authoritarian future under new contours, since threats to the democratic order are emanating from the President of the Republic.

However, despite the future that we see for now, we do not understand that the possibilities of a democratic and emancipated horizon are annulled. With this text we intend only to contribute, as so many citizens have done and each in their own way, with a warning sign that we need to remain attentive and strong.

Building elements for settling accounts with the past of the dictatorship is a fundamental step for the existence of democratic stability in Brazil’s present and future, as well as building elements that enable the defense and strengthening of Brazilian institutions. It is necessary to continue the mobilizations in defense of democracy, science and, fundamentally, life. 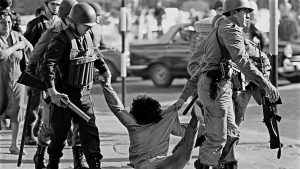